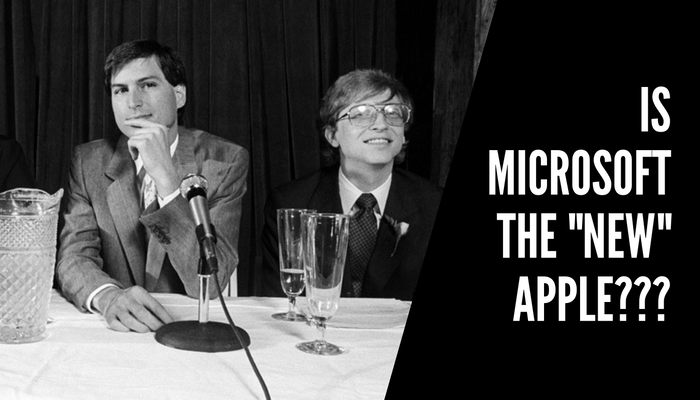 Is Microsoft the New Apple?

There was a time when Microsoft was considered an “evil conglomerate” and Apple, the purveyor of all things good, creative and innovative in the expanding world of personal computing – our technology saviour!

Having taken a great big bite of the preverbal apple, we became intrigued, enveloped and somewhat confined by Apple’s growing range of products (mp3 players, phones, laptops, tablets, watches, smart TVs, etc.). Despite the cost, these products were everywhere; I recall walking into one of my first lectures along with 300+ fellow students back in 2011 and seeing what must have been 200 little apples glowing back at me.

Now, being an avid user of MacBooks and iPhones both at work and in my personal life, I have praised the brand for its convenience and ease of use. But this isn’t enough anymore. In fact, it seems that Apple has stopped innovating and has been figuring out ways to lock in its users – creating an Apple universe where all your Apple devices can sync with each other but not anything else. It’s profitable, but it’s becoming increasingly manipulative and restrictive.

Throughout its history, Microsoft has always been commended for its versatility and customisation; but more recently they have also begun to focus on design and ease of use. In a way, Microsoft is becoming the new and improved Apple – they are even creating similar advertisements. With an existing (and growing) loyal following, and a stronger focus on things like user experience (and even developer experience), Microsoft is shooting back to the top.

Moreover, Microsoft is finally embracing the democracy of the internet. By open-sourcing .NET core and a lot of their products, they are opening themselves up to the next generation of developers. When Satya Nadella spoke in Sydney last week, he enthused over the work that some developers have been carrying out with Microsoft’s open APIs. One such example is an application created by a group of medical students, Eyenaemia, that is able to detect eye problems with just a snap of a selfie. Microsoft has made their Artificial Intelligence accessible to large corporations and single developers alike, so we can expect many more inspirational stories and life-changing (maybe even life-saving) applications to start popping up.

With versatile innovative technologies, user experience, and sophisticated A.I. at the forefront of every developer’s mind, is Microsoft finally giving developers everything they’ve been looking for in one place?

Anastasiya Loukienko, Insights
Newer Post Wishing you all a safe and festive end to 2016. Older Post Clocklocked – can you solve away and save the day???
One size fits all? Uhhhh no.
Square Peg? Not us - not you!
Train hard to play hard!
Show me the money : Show me the quan!
Normal is boring!
United colours of Onset!
Be Mobile - Be Better!
Zero to Hero!
Get Defined!
Let's Chat
Share my resume
Looking for a contract hire?
Looking for a fulltime hire?
Do you want Great Candidates?
Career Opportunities